Time flies when you’re having fun and it sure has flown by for me looking back on 25 years in business here in Santa Barbara.  Where it all began, my office location at El Centro building is coming to an end I’m sorry to say.  It’s the only address I’ve had in SB that has not changed over the years.

The Lippincott Family who owned it since 1948 went and sold it to a land baron and his investors for …$8 million dollars.  Do ya think the rent will go up?  Oh yeah.  Mine is increasing nearly four-fold.

Second is inside my suite – the great large red knot I rec’d from the Chinese Opera Co. for the great PR work I did for their show at the Lobero.  I gave the knot to Lovejoy’s Pickle Room when it opened in October 2013 for more good luck.  It looks even better in the new location.

Third down – Paul Wellman photographer for the SB Independent took this of me on the front steps of El Centro for a story on how I made it in SB a few years ago.

Fourth down – Back in the 90’s I was Communications Director for the Lobero Theatre. Santa Barbara Magazine wrote this little item up on me for it’s “Around Town” section.

Five & Six are Shots of the Lobero stage house, and shadows on the walls of the theatre on the dressing room side.

Last shot is the press and ads for the newly opened El Centro in 1929.  Caught with a Model T Ford of what might be the same year.  My good luck! 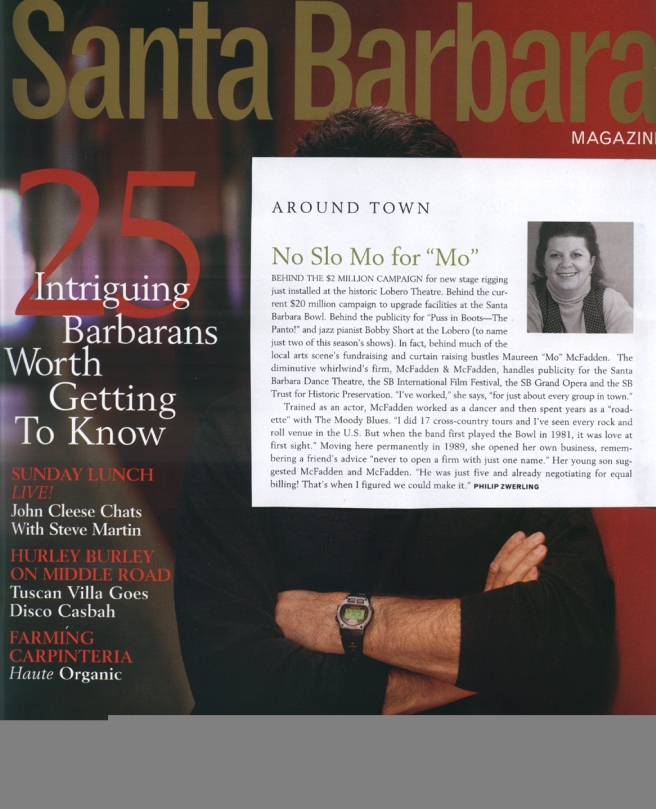 I am going to relish the time I have left on my lease – through the end of February 2018.

If you’ve never seen my office, well, it’s not like any other pffice in SB.  Been described as a “Tin Pan Alley” office by which I take as a very high compliment.  Every inch of wall space is covered with posters from shows I have worked on or people I have worked with at the Lobero as well as other places.  Sweet sweet memories!

Even though my downtown era is coming to a close, I’ll still be working.   Ready to help you out.   Same phone number 805 689 5053 and same e-mail mcmpr101@gmail.com for business inquires.