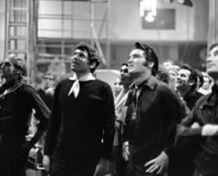 WITH SPECIAL GUEST: PRODUCER/DIRECTOR STEVE BINDER
AT THE PLAZA PLAYHOUSE IN CARPINTERIA

(Carpinteria, CA) Elvis Presley would have turned 80 on January 8, 2015. To commemorate the anniversary of the King’s birth, the Plaza Playhouse Theater in Carpinteria will screen an extended cut of the Elvis Comeback TV Special on January 10, 2015 at 7pm. The special had a one time only showing on NBC-TV on December 3rd, 1968 and was the highest rated program of its type. This is Elvis at the top of his game and looking great in a sleek all black leather outfit, to match his jet black hair in the traditional pompadour for most of the show. Dancer’s costumes and make-up are vintage 60s. All his #1 hits are included in the show and this screening adds more footage not used on the TV special. Running time is 90 minutes.
At a get acquainted meeting in the spring of 1968, Steve Binder—recently tapped to direct an upcoming Christmas TV Special with Elvis Presley—was asked by the King of Rock N’ Roll where he saw the singer’s career at the moment. Binder, knowing that Presley hadn’t had a chart making hit in a number of years and that his last TV performance was nearly seven years before, jokingly replied, “In the toilet.”
Surprisingly, Presley didn’t take offense to the comment, but instantly took a liking to the honesty expressed by Binder which then launched the two of them into collaborating on what would become a record breaking show by the end of the year. Simply called “Elvis,” the 1968 TV special became better known as “The Comeback Special.” Elvis’ popularity soared and he roared back into the public eye.
As initially conceived by Col. Tom Parker, Elvis’ manager, and several executives of NBC, it was to be a show that would feature primarily carols, hymns and gospel songs. Binder bluntly told Elvis it must showcase the huge hits he had made so popular over the past 12 years and it should be staged in an intimate setting, with Elvis surrounded by the audience. Elvis agreed, but Parker angrily rejected the idea and wanted Binder fired, however, he too came around to accepting the concept.
Proceeds from this show will be for the theater’s “Big Screen” campaign. Peter Bie, PP board member said “This will be the final push for the money to buy the big screen and all the accessories needed to complete the experience.”
Get the inside story behind the making of the special, fraught with all kinds of off stage troubles and his mutually respectful relationship with Presley, as told by Binder in a Q&A that will follow the showing of the special.
When Steve was at the Plaza in August for a screening of “The T.A.M.I. Show” it sold out 24 hours in advance and everyone who was lucky enough to be in the house said, “Bring back Steve Binder!” Find out how TV handled the new craze of rock n’ roll music with the man who broke all the rules and a few barriers along the way.
Tickets for this one night event are $20 and available in person at Seastrand, 919 Linden Ave., Carpinteria during regular business hours (cash or check only). You can also buy online at plazatheatercarpinteria.com.
The Plaza Playhouse Theater is located at 4916 Carpinteria Avenue, Carpinteria, CA 93013. Phone: (805) 684-6380. Free parking nearby. The box office will be open on Saturday, January 10 from noon until the start of the show at 7pm to accommodate last minute ticket purchases. Wheelchair accessible.
www. PlazaTheaterCarpinteria.com

http://en.wikipedia.org/wiki/Elvis_(1968_TV_program) In Steve Binder’s Bio: 1968 would be the year that Steve conceived, produced and directed Elvis Presley in the highly acclaimed ratings winner for NBC, most often referred to as “The Comeback Special.” Legendary record producer Bones Howe handled all the recording chores for the show. TV Guide called it “the second greatest musical moment in television history next to the Beatles debut on Ed Sullivan.” Steve’s 2008 book on the making of the Elvis special, “’68 at 40–A Retrospective,” tells the inside story of how Elvis initially reacted to Binder and the working relationship that developed between the two.